Each school year, thousands of Georgia students transfer schools for reasons other than grade promotion. Student mobility not only affects the individual student but also the teacher and students in his or her classes. In June 2014, GOSA published a report on student mobility during the 2012-2013 school year.  This education update analyzes mobility patterns during the 2013-2014 school year.  In general, patterns in the 2013-2014 data are similar to those in the 2012-2013 data.

To count as “mobile” for the purposes of this analysis, students must have entered or withdrawn from a school between October 1 and May 1. October 1 is the Georgia Department of Education’s (GaDOE) fall enrollment count date.[1] May 1 represents a consistent date that is prior to the end of the school year in all Georgia districts. Students who withdrew and reentered the same school within seven days are not counted as mobile.

Mobility at the School and District Levels

Mobility at the Student Level

At the student level, of the 1.7 million public school students in the 2013-2014 academic year, approximately 176,000 students, or 10.1%, were mobile during the school year.  In a majority of school withdrawals (59.3%), the student transferred to another public school within Georgia.  The top five reasons for transferring are listed below.

Student and mobility by race.png

Mobility and the CCRPI

In general, as a school’s churn rate increased, its score on the College and Career Ready Performance Index (CCRPI) decreased.[5]  Each year since 2011-2012, the Georgia Department of Education has produced CCRPI scores for schools and districts to serve as the statewide accountability system. The CCRPI score is out of 110 points (100 points and 10 challenge points).   The figure below illustrates the relationship between the churn rate and the CCRPI score.  Based on the data available, we cannot make claims about whether a school’s churn directly affects its CCRPI score. 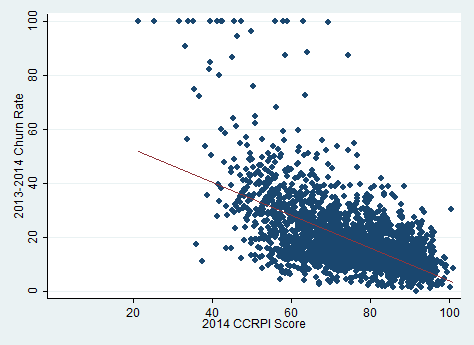 A school’s churn rate provides meaningful information about its learning environment.  This education update finds wide variance among schools in terms of churn rates.  However, the percentage of students who move, their reasons for moving, and most school’s churn rates tend show little change over the two years studied.

[3] Schools with mobility rates greater than 100 were recoded to equal 100 for display purposes.

[4] When a school utilizes the Community Eligibility Provision (CEP), it provides free lunch to all students at its school.  As a result, the school does not have information regarding whether each student is eligible for free or reduced-price lunch (FRL) on an individual basis. As a result, the FRL indicator that is often used to measure poverty is no longer reliable for many schools.  For this reason, this education update does not analyze mobility based on percent FRL. For more information on CEP, click here.