By Hannah Page and Pascal Beaudette

On July 14, the Georgia Department of Education (GaDOE) and the Governor’s Office of Student Achievement (GOSA) released the first Financial Efficiency Star Ratings (FESR).[1] The goal of the star rating is to provide a comparison of district spending per student with overall academic performance.

The rating is based on the district's three-year average College and Career Ready Performance Index (CCRPI) score and the percentile of the three-year average per pupil expenditure (PPE). The FESR should be one measure that stakeholders evaluate in conjunction with all other information provided for each district. This education update provides an overview of the FESR and presents summary information about this year’s rating. A downloadable file of the ratings by district is available

For the 2014-2015 school year, each school district in the state received an FESR to show the relationship between pupil spending and student achievement.[3]  The matrix below shows the method for determining the FESR using both the PPE percentile and the CCRPI scores.  Districts can earn between a one-half star and five stars, with a one-half star rating for districts with the highest PPEs and low CCRPI scores, and a five-star rating for districts with the lowest PPEs and high CCRPI scores.  The 2014-2015 FESR is based on a three-year average (2012-2013, 2013-2014, and 2014-2015) of PPE and CCRPI scores. 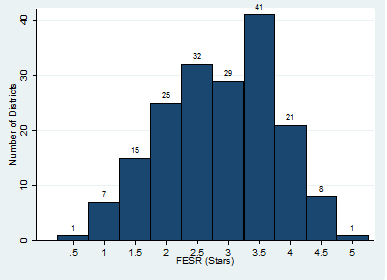 On the following map, districts are shaded according to their star rating.  In the southwestern part of the state, there is a concentration of low-scoring districts, with four adjacent districts earning only one star.  On the other end of the FESR range, a cluster of 4 to 4.5 stars is clustered around the north metro Atlanta area. 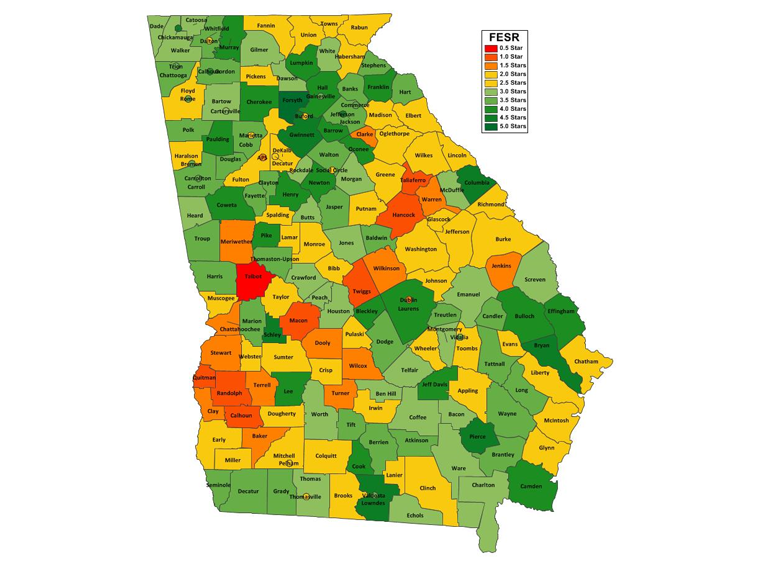 Patterns in Per Pupil Expenditures (PPE) 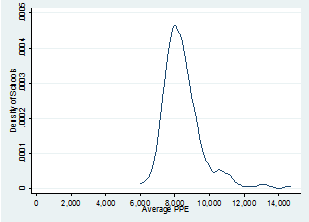 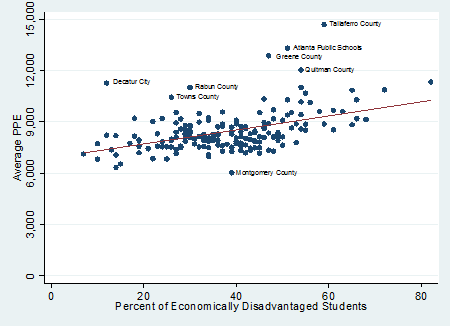 Overall, the Financial Efficiency Star Rating provides a district-level measure of the relationship between per pupil spending and academic achievement, as measured by the CCRPI. Only Forsyth County received five stars, and eight districts received 4.5 stars.  One district (Talbot County) received one-half star.  The average district earned 2.9 stars.  Geographically, there is a concentration of districts receiving 4 or 4.5 stars in the area northeast of Atlanta and a concentration of districts receiving 1 to 1.5 stars in the southwestern portion of the state.

[1] O.C.G.A. §20-14-33 requires that the Governor’s Office of Student Achievement (GOSA), in coordination with the Georgia Department of Education (GaDOE), create a financial efficiency rating.  The law requires that GOSA and the GaDOE collaborate to “adopt and annually review, and revise as necessary, indicators of the quality of learning by students, financial efficiency, and school climate for individual schools and for school systems.”  Financial efficiency “may include an analysis of how federal and state funds spent by local school systems impact student achievement and school improvement, and components used to determine financial efficiency may include actual achievement, resource efficiency, and student participation in standardized testing.”  The rating must be based upon five stars.

[2] Historically, student eligibility for free/reduced-price lunch (FRL) served as a proxy for individual student/family income status. However, due to the recent expansion of the National School Lunch Program’s Community Eligibility Provision (CEP), FRL is no longer an accurate measure of student income status. For this reason, this education update uses directly certified students as a measure of poverty rather than FRL.  For more information, click here to read GOSA’s education update on measures of student poverty.

[3] State schools (Atlanta Area School for the Deaf, Georgia, Georgia Academy for the Blind, and Georgia School for the Deaf) do not report their financial information separately using the Local Units of Administration Chart of Accounts.  The state schools are operated by the Georgia Department of Education.  Therefore, the financial activity of the state schools is reported in the State of Georgia Comprehensive Annual Financial Report but not in the data file used to calculate the FESR.  As a result, these schools will not receive an FESR. Additionally, state charter schools do not receive a district rating.

[5] Directly certified students must either live in family units that receive Supplemental Nutrition Assistance Plan (SNAP) benefits or Temporary Assistance for Needy Families (TANF), and/or be homeless, unaccompanied youth, foster or a migrant.

[6] The same pattern holds when looking at only districts with an average PPE less than $12,000.

[8] For detailed information on these components, see this list compiled by GaDOE.