The Federal Requirements of the ESEA Waiver

In February 2012, the U.S. Department of Education (US ED) granted a waiver from some accountability requirements of the Elementary and Secondary Education Act (ESEA), more commonly known as No Child Left Behind (NCLB), to Georgia and ten other states. This waiver has broad implications for how the Georgia Department of Education (GaDOE) evaluates and supports its schools. Georgia’s application included components required by US ED and additional components that are unique to the state, as detailed in the boxes below.

The waiver will last through the 2014-15 school year. However, if Congress reauthorizes ESEA before that time, it will take precedent over the waiver. Though it expires in three years, GaDOE plans to maintain certain aspects of it, such as the CCRPI, beyond that time.

This education update is the first in a two-part series about the ESEA waiver. It focuses on why Georgia pursued the waiver and on the components of the waiver that US ED required states to implement. It also incorporates Alert Schools because they are closely related to Focus Schools.

A future education update will focus on Georgia’s new statewide accountability system, the College and Career Ready Performance Index (CCRPI), which will serve as the future of accountability for all public schools and districts in Georgia.

A Look Back at “No Child Left Behind” Requirements

NCLB set a goal of bringing all Georgia students to proficiency in math and English Language Arts/reading by 2013-14. Georgia also set a goal of a 100% graduation rate by the same date. Using baseline test performance, the state set annual measurable objectives (AMOs) for achievement, attendance (elementary and middle schools only), and graduation rates (high schools only) of “all students” and within nine student subgroups.[1]

For a school to make Adequate Yearly Progress (AYP) toward this goal, it had to have at least 95 percent student participation on state tests and had to meet the state AMO for “all students” and in every subgroup. In other words, if a school missed AYP in one subgroup, it did not make AYP. Schools that missed AYP in the same area for two consecutive years were designated as “Needs Improvement” and received intervention from the GaDOE. If a school continued to miss AYP in subsequent years, state oversight and support increased with each year.

Why Georgia Pursued an ESEA Waiver

While ESEA provided a framework for state-level accountability, it only considered test participation rates, student performance in math and English Language Arts/reading, attendance, and graduation rates. This structure provided schools and districts with an incentive to focus on these areas at the expense of other subjects and factors in a student’s education. In response, the GaDOE applied for a waiver to create a broader measure of school performance in line with its focus on college and career readiness for all students.

Per US ED guidelines, non-Title I schools were not identified as Priority or Focus schools. As a result, the GaDOE created three categories of Alert Schools that will receive the same level of state support as Focus Schools for three years, but they do not have to be Title I schools. Unlike Priority and Focus Schools, which were named once, the state will identify Alert Schools each year.

Unlike Priority and Focus Schools, the US ED did not mandate the creation of Alert Schools. The GaDOE released

Priority Schools receive more intensive GaDOE support than Focus Schools. First, districts must work collaboratively with the GaDOE to assess the leadership of the current principal. The GaDOE also recommends that the district hire an instructional coach to support teachers in the school. Some of the remaining requirements include participating in a GAPSS analysis of school performance and needs, developing a school improvement plan, providing additional learning time, attending mandatory GaDOE professional learning, facilitating collaborative planning among faculty, offering a Flexible Learning Program, and developing a plan for parent and community engagement. To support these interventions, the GaDOE has assigned a state school improvement specialist (SIS) to each Priority School.

Focus and Alert Schools must implement many of the same requirements as Priority Schools. However, the state did not assign a SIS to each school or require the district to review the current principal’s performance. Instead, the state provides support to the district and professional learning for school-level staff. 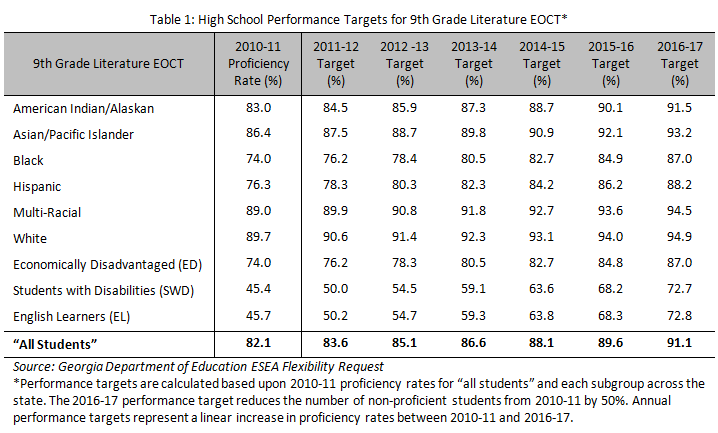 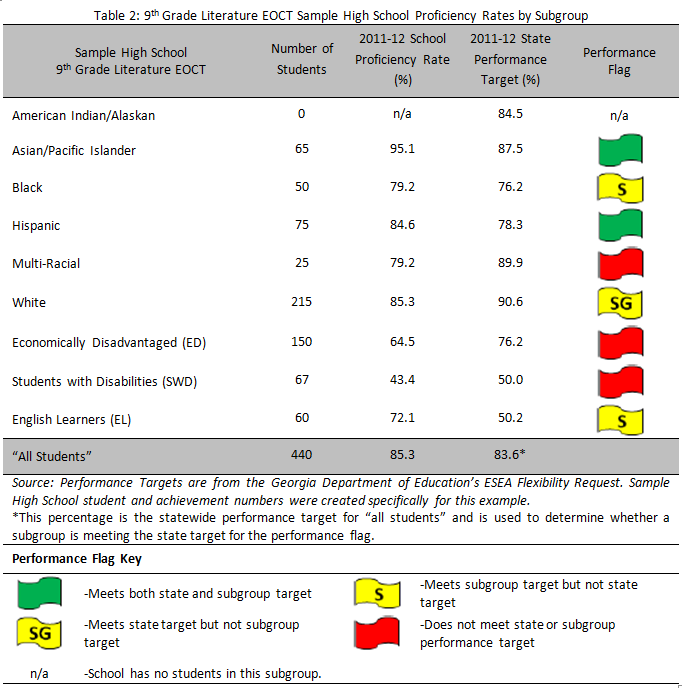 Georgia’s ESEA waiver sets a new statewide achievement goal of reducing the number of students who are not proficient by 50% by 2016-17, and it creates a new performance flag system as a more precise way to measure progress toward that goal. It also ensures that underperforming Title I and non-Title I schools receive state support for three years. Finally, through the creation of the CCRPI, the waiver provides a foundation for a more inclusive statewide accountability system that will last beyond the waiver’s three-year span. The box at right provides a preview of the CCRPI framework. GOSA’s next education update on the ESEA waiver will focus on the CCRPI once the GaDOE has finalized the calculation for it.

[1] Under ESEA, “all students” is considered a subgroup representing every student in a school.

[2] Schools in which children from low-income families make up at least 40 percent of enrollment are eligible to use federal Title I funds. Any school that opts to receive these funds is considered a Title I school.

[3] GaDOE is waiting for a more specific definition of the graduation rate criterion from US ED.

[5] As noted previously, the next education update on the ESEA waiver will discuss the CCRPI formula.

[6] The calculation of CCRPI is independent of the performance flag determinations.

[7] Under AYP, subgroups had to have at least 40 students or be at least 10% of the student population to be counted. The performance flag system will have a minimum subgroup size, but the GaDOE has not determined the group size at this point.