By Brian Delgado and Prateek Paul

In recent years, Georgia schools and districts have sought to expand high school students’ access to college-level coursework. One of those opportunities is the College Board’s Advanced Placement (AP) program, which provides college-level courses taught by trained high school teachers within the high school setting. Students who take AP courses have the option of taking an accompanying AP exam and potentially receiving college credit for scoring three or above on the test. Currently, there are 38 different AP courses offered throughout Georgia.[1] Using data from GOSA’s Report Card, this education update summarizes trends in AP over the past five years in Georgia public schools.[2]

AP courses target students who are academically prepared and motivated to take college-level courses. Students also take AP courses to earn college credit and be more prepared for college-level work. If students decide to take the AP exam, they can score between a one and five, with a score of three or higher considered passing by the College Board. Students may be eligible to receive college course credit in a corresponding subject of the AP exam if their score meets the criteria established by their respective college/university. AP tests are grouped into the following categories:[3]

To establish trends in AP tests and performance, this education update examines five years of high school data from 2011-2012 to 2015-2016, the most recent data available.[7] 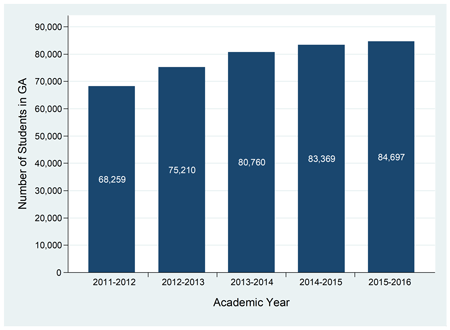 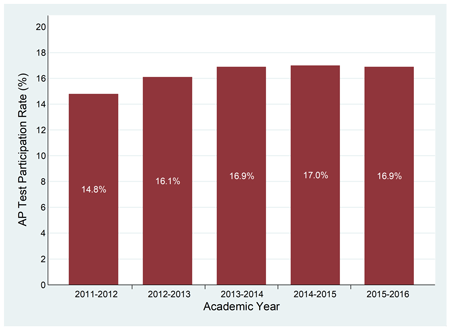 The percentage of tests with a passing score (three or higher) increased by 1.8 percentage points over the course of five years, with 56.4% of tests having a three or higher in 2015-2016.[11]  Over these five years, Georgia’s average pass rate (54.6%) has been slightly below the national average (56.7%).[12] Pass rates remained constant across most subject categories over the five years.  The subject pass rates have also been very similar to the statewide average pass rate over the five-year span, with the exception of the World Languages & Cultures and Arts categories for which pass rates were higher than the statewide average.[13] However, it is important to point out that there were significantly fewer tests administered in the World Languages & Cultures and Arts categories per year than in the English, History & Social Sciences, and STEM categories (see Figure 3), which may be affecting the higher pass rates for these exams.[14] 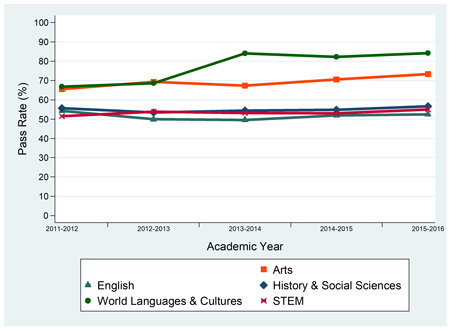 Most of the districts with high pass rates are concentrated around metro Atlanta and the northern and southeastern parts of the state. Many districts in central and southwest Georgia did not administer any AP tests or had pass rates lower than 15%. 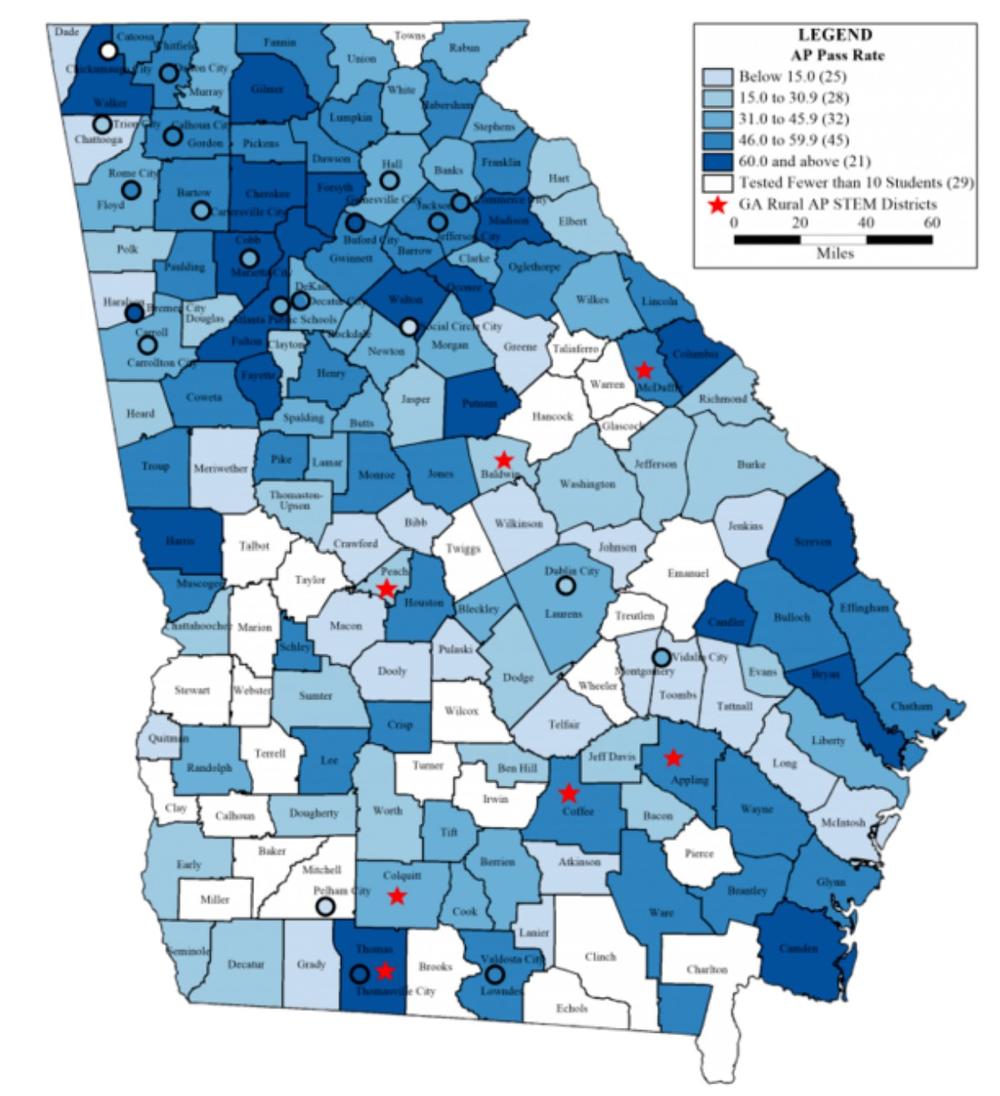 Overall, the number of AP tests taken and tests with a passing score increased over the five-year span from 2011-2012 to 2015-2016 across all subject areas.  Pass rates remained relatively constant over this period.[18], Georgia’s AP test participation rate increased slightly from 14.8% in 2011-2012 to 16.9% in 2015-2016. Geographically, districts with high AP pass rates are more concentrated around Atlanta and the northern and southeastern parts of Georgia, while several districts in central and southwest Georgia had few or no AP tests administered.  In general, AP participation continues to grow in high schools across Georgia, and through programs such as the Georgia Rural AP STEM Initiative, participation may increase participation even further.

[1] Visit College Board to learn more about AP Courses.

[5] The AP Computer Science Principles test has not yet been administered in Georgia. The AP Physics B test was replaced by the AP Physics 1 and 2 tests starting in 2014-2015.

[10] This figure only includes districts that administer AP tests in both school years and excludes state charter schools.

[14] It is important to keep in mind the number of test in each category.  In 2016, there were 2,730 Arts tests, 25,651 English tests, 72,736 History & Social Sciences tests, 42,971 STEM tests, 3,434 World Languages & Cultures tests. The low number of Arts and World Languages & Cultures tests could be indicative of a selection effect of who takes these AP exams and may explain the higher scores.

[15] State charter schools and state schools are not included in this map.

[18] With the exception of tests in the World Languages & Cultures category, as discussed above.