In 2011, the Innovation Fund began as a $19.4 million competitive grant program created under Georgia’s Race to the Top (RT3) Plan. After RT3’s completion in 2014, Governor Nathan Deal appropriated state funding to continue Georgia’s investment in innovative programs. Since its inception, the Innovation Fund has invested over $31 million in public education entities to plan, implement, or scale unique programs to improve student achievement and confront our state’s most significant education challenges.

In the 2006-2007 school year, Gwinnett County Public Schools (GCPS) faced one of these challenges.  During that school year, only 13% of over-age GCPS students entering ninth grade graduated from high school.[1] To address this problem, GCPS created the Gear Up for Graduation program (formerly known as the STEM Targeted Education Program). [2]  Gear Up for Graduation supports over-age eighth graders – defined as students entering high school at age 15 or older – in catching up with their grade-level peers.

In 2012, GCPS received a $1 million RT3 Innovation Fund grant to implement Gear Up for Graduation at two middle schools.[3] The district then received Innovation Fund scaling grants in fiscal years (FY) 2015 and 2017 to scale the program to two additional schools. After four years of implementation, the program has led over 400 students to get back on track to graduation, and students have shown positive outcomes in academic motivation and interest, as well as college and career aspirations. This education update describes the Gear Up for Graduation program model, GCPS’ approach to scaling the program, program outcomes, and next steps.

How It All Started: Moore and Sweetwater Middle Schools

In 2012, GCPS used its RT3 grant to implement Gear Up for Graduation at Moore and Sweetwater Middle Schools, both located in Lawrenceville, Georgia. The program targeted 80 over-age eighth grade students from four area middle schools within the Berkmar High School Cluster.[4] Gear Up for Graduation accelerated the academic year by teaching eighth grade standards in the fall semester and ninth grade standards in the spring semester, allowing over-age students the chance to bypass ninth grade and enter high school as sophomores.

To increase academic engagement, Gear Up for Graduation developed a STEM-centered curriculum to engage students in experiments, projects, and fieldtrips.[5] A partnership with Gwinnett Technical College allowed students to participate in STEM-focused field experiences and hands-on learning – leading to the possibility for dual-enrollment with the college when students enter 12th grade. In addition, the program focused on building students’ skills in the areas of motivation, self-management, and persistence, by emphasizing student collaboration and promoting strong teacher-student relationships.

During year one, the Moore and Sweetwater Middle School pilot experienced some challenges with the model that prompted key changes to Gear Up for Graduation for year two and beyond. One change was for teachers to more effectively navigate students through the program’s blended learning component.[6] Students in the first-year pilot experienced some difficulty with self-direction when it came to the online modules, and the district decided that teachers should provide more face-to-face instruction as students adapted to blended learning. Additionally, Gear Up for Graduation’s curriculum embedded eighth grade standards into ninth grade standards, so that both academic years could be seamlessly taught as one, rather than teaching each grade’s content in two separate semesters.

Gear Up for Graduation Outcomes

Gear Up for Graduation’s innovative approach has yielded positive outcomes in most targeted areas.  Several of these outcomes are highlighted below. 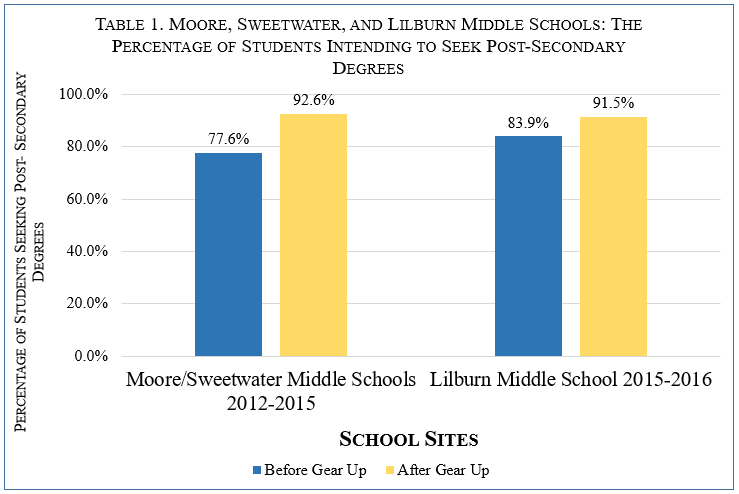 Between 2012 and 2016, Gear Up for Graduation has offered over 400 students the opportunity to get back on track to graduate. On October 11, 2016, Governor Deal announced that GCPS was one of 18 FY17 Innovation Fund grant recipients. GCPS will use its nearly $294,000 FY17 Innovation Fund grant to scale the Gear Up for Graduation program to Summerour Middle School. Summerour anticipates serving 100 students in the program’s first year.

The new Gear Up for Graduation site is just one more example of how GCPS has strategically scaled the program throughout the district.  GCPS uses assessment data, student demographic information, and graduation rates to implement the program in the clusters with the most need.  In addition, the district selects schools located in areas that may serve as an option for students in neighboring schools. Using this method, GCPS hopes to reach as many over-age students as possible.

[3] In addition to the Innovation Fund grant, funding from the Gwinnett County Public School District, Gwinnett County Foundation, and Cisco was used to implement the program.

[6] Blended learning is a formal education program in which a student learns at least in part through online learning with some element of student control over time, place, path and/or pace, and at least in part in a supervised brick-and-mortar location away from home. In addition, the modalities along each student’s learning path within a course or subject are connected to provide an integrated learning experience. Blended learning is NOT simply placing technology in the classroom or providing students access to online courses. Blended learning utilizes technology to restructure traditional school models, promote data-driven and individualized instruction, leverage the strengths of effective educators, and advance student achievement. (Definition adapted from The Clayton Christensen Institute)

[9] The Applied Learning Student Questionnaire (ALSQ) measures growth in student problem solving, communication skills, self-management, and engagement. Intrinsic motivation is defined as motivation stemming from goals of mastery, learning, and challenge. Self-regulation and management is effortful and persistent behaviors that are used to guide, monitor, and direct the success of one’s learning and performance. Intent to persist are aspirations, plans, and goals to pursue additional education and a career in STEM.

[10] Students who did not participate in the Gear Up programs attended middle schools located in areas not served by the program.