The composition of students in Georgia’s public schools has changed over the past ten years.  This month’s education update examines these trends at the state and district levels and illustrates their geographic distribution.  Understanding these trends is important for Georgia educators to ensure that all students have access to quality education that is tailored to their needs.

In 2012-13, more than 1.6 million students attended Georgia public schools—an increase of 170,000 from enrollment in 2003-04.[1]  Compared to ten years ago, the 2012-13 student body had a greater percentage of Asian students, Hispanic students, multi-racial students, English Language Learners (ELL), and students qualifying for Free/Reduced-Price Lunch (FRL).  The increases were largest among Hispanic students and students qualifying for FRL. Conversely, the state had a smaller percentage of white students, black students, and Students with Disabilities (SWD). This decrease was particularly large among white students.  The table below shows the percentage of total student enrollment each subgroup represents.

Over those ten years, the largest subgroup change is the increase in students qualifying for FRL. The two maps below illustrate the district-level percentage point change in FRL students between 2003-04 and 2012-13 as well as the overall percentage FRL in 2012-13.[2].  In 2003-04, 684,000 students qualified for FRL, representing 46% of all students.  By 2012-13, this number had jumped by more than 300,000 when 60% of all students, or 995,000 students, qualified.  Much of this increase is likely driven by the effects of the Great Recession on family income, which is used to derive a student’s FRL status.

In 2012-13, only four districts had 25% or fewer students qualify for FRL: Decatur City, Fayette County, Forsyth County, and Oconee County.  In many districts in the middle and southern portions of the state, more than 75% of students qualified.

Trends in Students with Disabilities and English Language Learners

Trends in Racial/Ethnic Composition since 2003-04 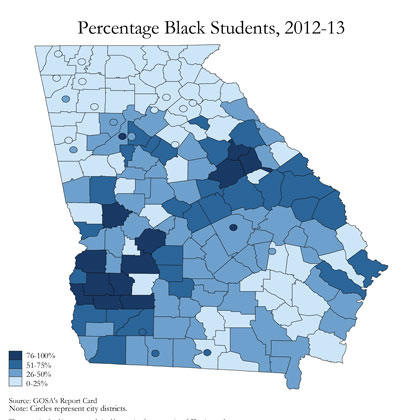 The composition of Georgia public school students has changed over the past ten years.  Far more students qualified for FRL in 2012-13 than in 2003-04, with a particularly large increase in North Georgia.  In addition, the state saw a significant increase in the percentage of Hispanic students over that time period. These trends are important to consider as educators seek to meet the changing needs of Georgia’s students.

[2]  Shapefiles for the maps provided by Dr. Moshe Haspel, of Neighborhood Nexus.