Information on the number and percentage of students who graduate from high school is readily available, but much less is known about where those students end up after high school.  This education update examines the post-secondary enrollment and credit completion rates of Georgia high school graduates over a three-year period. The data are drawn from the c(11) and c(12) reports that the Governor’s Office of Student Achievement (GOSA) publishes on its annual Report Card.[1] This information is provided by GA•AWARDS (Georgia's Academic and Workforce Analysis and Research Data System), which is the statewide longitudinal data system housed at GOSA.

To establish trends in college enrollment, this education update examines data for the classes of 2010, 2011, and 2012.[5] Students are counted as enrolled if they entered a post-secondary institution within 16 months of high school graduation. 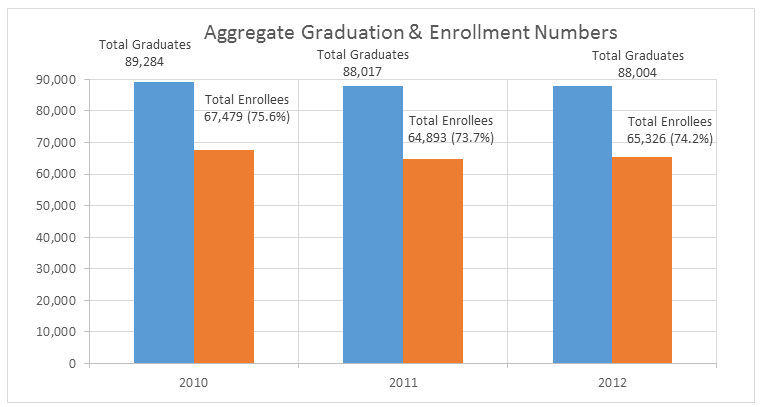 Female graduates enrolled at a higher rate than male graduates for all three cohorts. Female graduates also outnumbered male graduates. In the 2012 cohort, female students made up 51.9% of all graduates, but accounted for 55.5% of all enrollees. The female enrollment rate was 79.5%, compared to 68.6% for males.

Asian graduates enrolled in post-secondary institutions at a higher rate than other races/ethnicities, topping 84% in all three years studied. White, Black, American Indian, and Pacific Islander graduates all enrolled at rates similar to one another, ranging from 71.8% to 76.2%. Hispanic graduates had the lowest enrollment rate of 58.7%. However, this was an increase from 53.3% for the class of 2010, one of the largest improvements across the period, by percentage points, of all subgroups. The number of Hispanic graduates also grew significantly during the period studied. 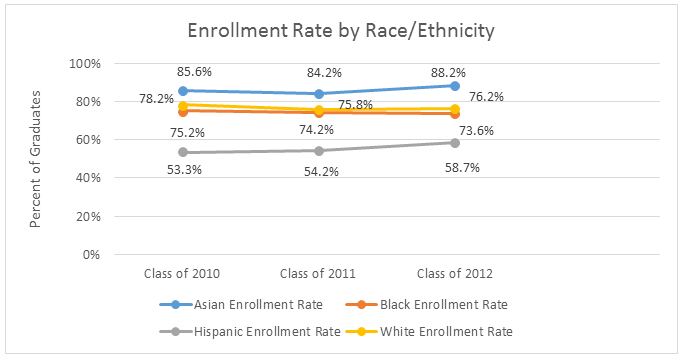 Note: Due to space constraints, groups comprising less than 3% of the total population are not featured

Graduates qualifying for free or reduced-price lunch (FRL) made up a significant portion of the total population, particularly in the class of 2012, when they comprised 42.3% of all graduates. Students in this group had a 65.1% enrollment rate, which demonstrated very little change for all three cohorts. This rate is 13 to 15 percentage points below the enrollment rate for non-economically disadvantaged graduates. 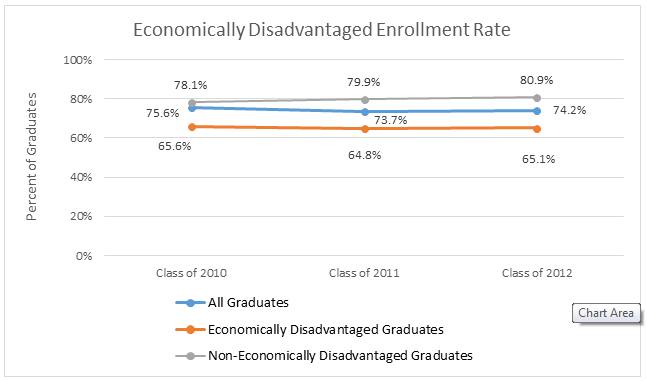 To establish trends in college enrollment, this education update examines data from the high school graduating classes of 2008, 2009, and 2010.[7] Data drawn during this period reflect public high school graduates who enrolled in a Georgia post-secondary institution and subsequently earned 24 credit hours (roughly equivalent to one year of college instruction) within their first two years.[8] The credit completion rate was 63.2% for the class of 2010, which is a decrease of 3.2 percentage points during the period studied. 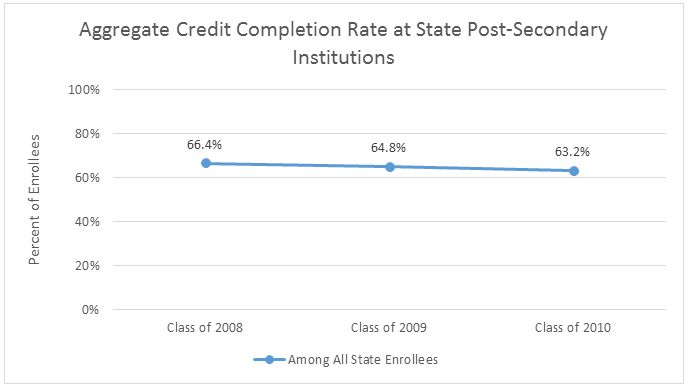 Females completed 24 credit hours in two years at a higher rate than males for all three classes of graduates. For the class of 2012, female students exhibited a credit completion rate of 65.3%, compared to 60.6% for males. Both genders showed a decline in completion rates for each year in the period studied. 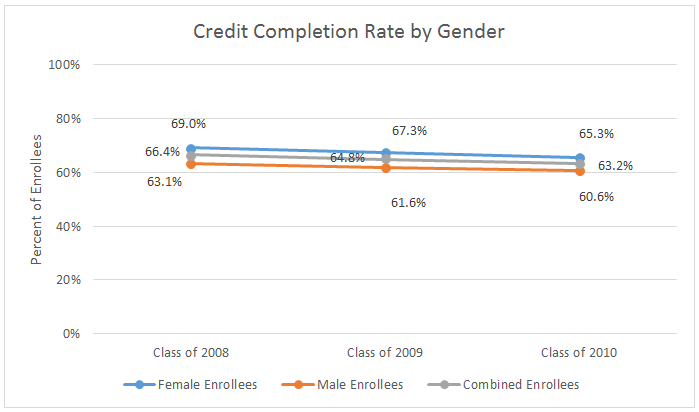 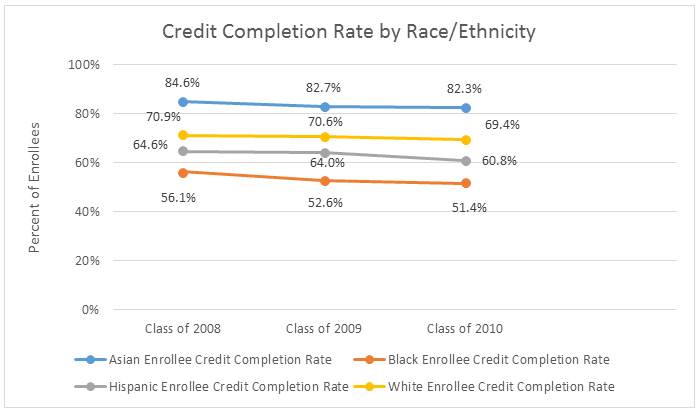 Note: Due to space constraints, groups comprising less than 3% of the total population are not featured.

Graduates who had qualified for free or reduced-price lunch (FRL) comprised 35.3% of enrollees. These students had a lower credit completion rate (50.5%) than the statewide population. The rate for FRL students declined over the period studied. 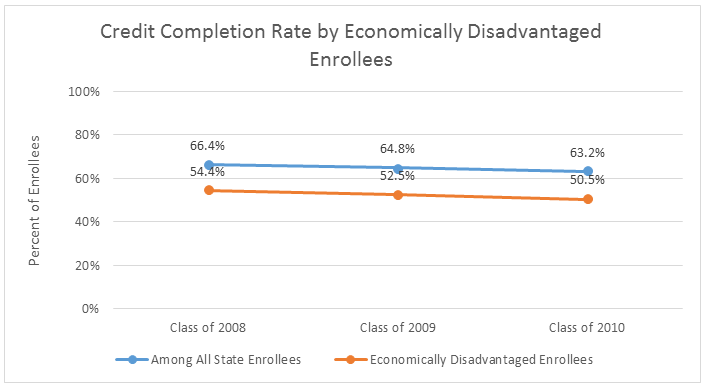 Credit completion rates for graduates at Georgia post-secondary institutions fell slightly over the period studied from 66.4% to 63.2%. Compared to enrollment rates, Georgia students were more stratified by race/ethnicity for credit completion, with the rates for minority students much lower than those for White and Asian students. Credit completion also showed a gap between the genders, with females achieving a rate of 65.3%, versus 60.6% for males.

[1] These federally-required reports are provided to the United States Department of Education.

[2] Unless otherwise noted, all enrollment information pertains to the class of 2012.

[4] Unless otherwise noted, all credit completion information pertains to the class of 2010.

[6] The counts presented below are from GA•AWARDS, which is pulled from GaDOE Student Record. As such, they will not directly match the counts on the “Indicators and Demographics” section of the Report Card because the GaDOE uses a different data collection, October FTE, to calculate graduates.

[9] Pacific Islanders and enrollees identifying as two or more races/ethnicities had too few results to be counted in the first two years of the period.